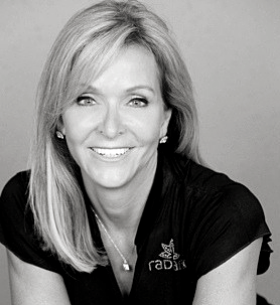 Behind the incredible Radiance Medspa staff stands Owner and Director Stephanie Schlageter, a former Research and Development Engineer for a medical device company with a master’s degree in Biomedical Engineering.
Growing up in the Chicago suburb of Evanston, Ill., Stephanie was the middle child of a large family. Her early professional experience included managing a marina as harbormaster of Wilmette Harbor in Illinois while in school and teaching English for a year in the small town of Jihlava, Czechoslovakia after earning a bachelor’s degree in mechanical engineering from Tufts University. Fully recognizing that her natural talents had always lain in math and science, she attended graduate school at Northwestern University, earning a degree in Biomedical Engineering while working in a brain tumor research lab. The master’s degree provided a perfect marriage for her lifelong interest in medicine and engineering. Relocating to Largo, Fla. in 1995 to begin her engineering career, she was able to continue her education with business classes at University of South Florida and Stanford University, which eventually sparked in her the desire for entrepreneurship. And the Bay Area has benefitted ever since. Opened in Belleair Bluffs in the spring of 2006, Radiance Medspa expanded to a second location at the Hyatt Regency Resort and Spa in Clearwater in 2011. Stephanie’s background in medical devices and biomedical engineering ensures that the treatments, equipment and services provided at Radiance Medspa will always be safe, current and effective.

With a strong focus on training, certification, licensing and experience, Radiance Medspa has won several professional awards including being honored as the Medium Business of the Year 2013 by the Clearwater Regional Chamber of Commerce, the #1 BOTOX in the county, the #1 Juvéderm business in the entire state of Florida and the Southeast United States, and the #1 provider of CoolSculpting in Tampa Bay. Radiance Medspa has also been recognized by the INC 5000 list of America’s Fastest Growing Companies for three years.

Stephanie ensures that the company is also active in supporting several charities and hosts several fundraising events annually such as Beauty Bash on the Beach, which raises funds for the Homeless Emergency Project. She serves on the Board of Directors for the Clearwater Regional Chamber of Commerce and is a member of the Tampa Bay Beaches Chamber of Commerce, the Medical Aesthetic Practice Association and Vistage International as well as a Friend of CASA (Community Action Stops Abuse) and a Friend of PACE Center for Girls. Stephanie is also excited to be a founding committee member of AchieveHERS, a new organization that endeavors to provide support, education and inspiration for women in business.

Married to a PhD neuroscientist who works in the pharmaceutical industry, Stephanie is a marathon runner, boater and proud mother of daughter Lauren who already plans to take over Radiance Medspa operations when she grows up.